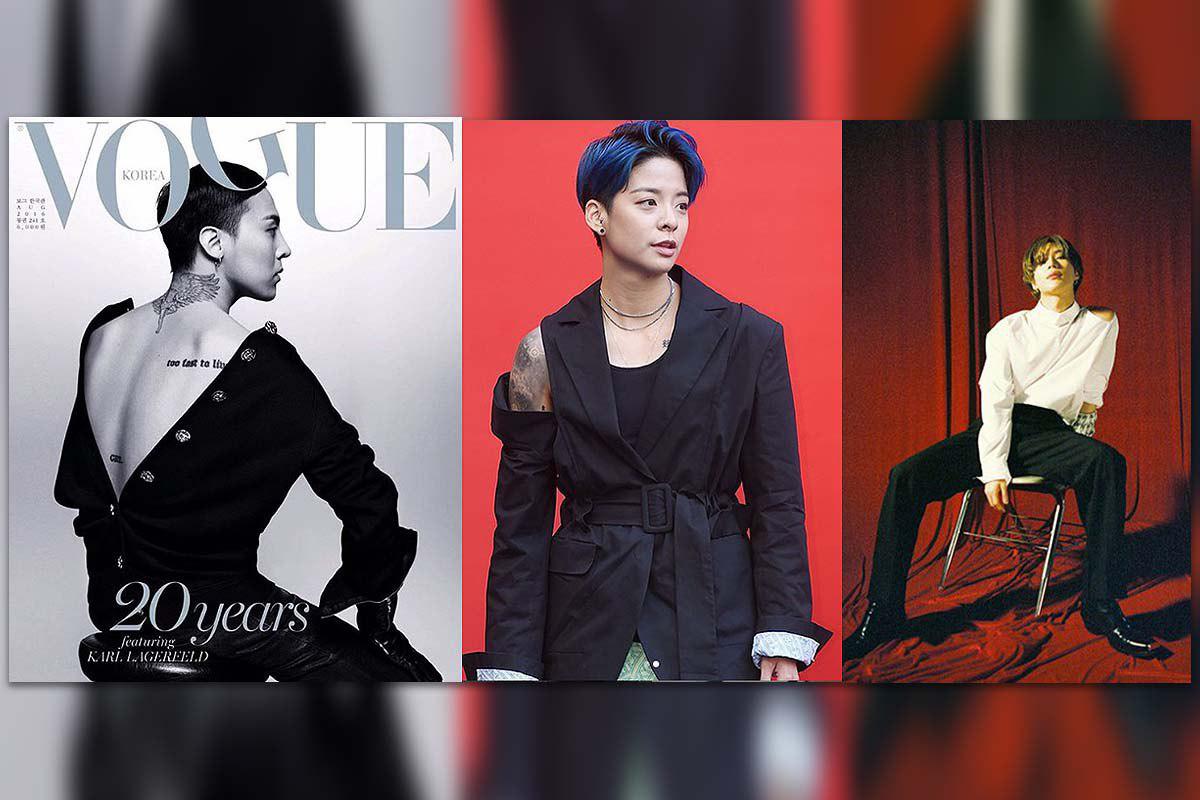 
Despite the conservative Korean culture, these K-Pop idols aren’t afraid to show something new.

The Korean pop phenomenon is continuously spreading across the world. The so-called Hallyu Wave has largely contributed in the scenes of music and fashion. Most especially, Korean idols are famous for their sophisticated skincare routine and impeccable fashion taste. However, a stigma has risen where people conceive negative impressions on male K-Pop idols for adapting beauty routines and fashion OOTDs that are female by standards.

One wrong move, and these artists would be easily criticized. But despite living in a country where gender norms are heavily imposed, these K-Pop idols have managed to cross boundaries as far as expressing themselves and paving way to break gender stereotypes in Korea.

South Korea’s legendary second-generation idol Kwon Jiyong, popularly known as G-Dragon from the K-Pop boy group Big Bang, is one of the highly-recognized trendsetters in the industry. The all-around artist has made his mark in the fashion world with his genderless clothing choices and as a fashion innovator, G-Dragon has collaborated with renowned brands such as Chanel.

He is not afraid to mix and match his clothes. He even experimented on having a long hairstyle while using makeup brands that catered to women. Thus, innovating change and flexibility in society’s preferences of style.

Since starting his career in 2008 with SHINee, Taemin became a superstar with his powerful dance moves. He made a fashion-forward impression when Taemon, while promoting the group’s second full album Lucifer, sported long hair and full bangs that complemented his androgynous features. This garnered praise from fans and netizens.

Taemin debuted as a solo artist in 2014, and made a comeback in 2017 with the powerful title track ‘Move’ which undoubtedly shook the community as he showcased his flexibility in the concepts showcased as a performer. The track’s choreography, crafted by Japanese dancer Koharu Sugawara, challenged gender norms and went beyond the standards as it manifested a notable combination of graceful femininity and powerful masculinity. This set a genderless standard not only for Taemin, but for artists who aspire to take a step away from the traditional.

Former 2AM member Jo Kwon is among the K-Pop idols who are not afraid to challenge gender norms. His soulful and powerful voice has captured the public’s attention, especially when he showcases his male diva persona on television.

Jo Kwon is known for his skills in fiercely nailing girl group choreography on variety shows. He’s also recognized for his eccentric and multi-faceted style as he took part in the Korean adaptation of the musical Priscilla in 2014 where he played the dual roles of drag queens Adam and Felicia. Although praised for his performance, Jo Kwon received false allegations on his sexuality. Unfazed by such issues, Jo Kwon continues to do what he does best: slaying the stage and leaving people in awe.

Jo Kwon is currently enlisted in the army for his 2 years of service.

Apart from being known for his buff image in Monsta X, Wonho is also known as a huge advocate of gender equality. He often expresses his disapproval against gender discrimination. And when asked what his ideal type is, he would often state a gender neutral response, saying he likes someone who is good at cooking ramen, regardless of gender. 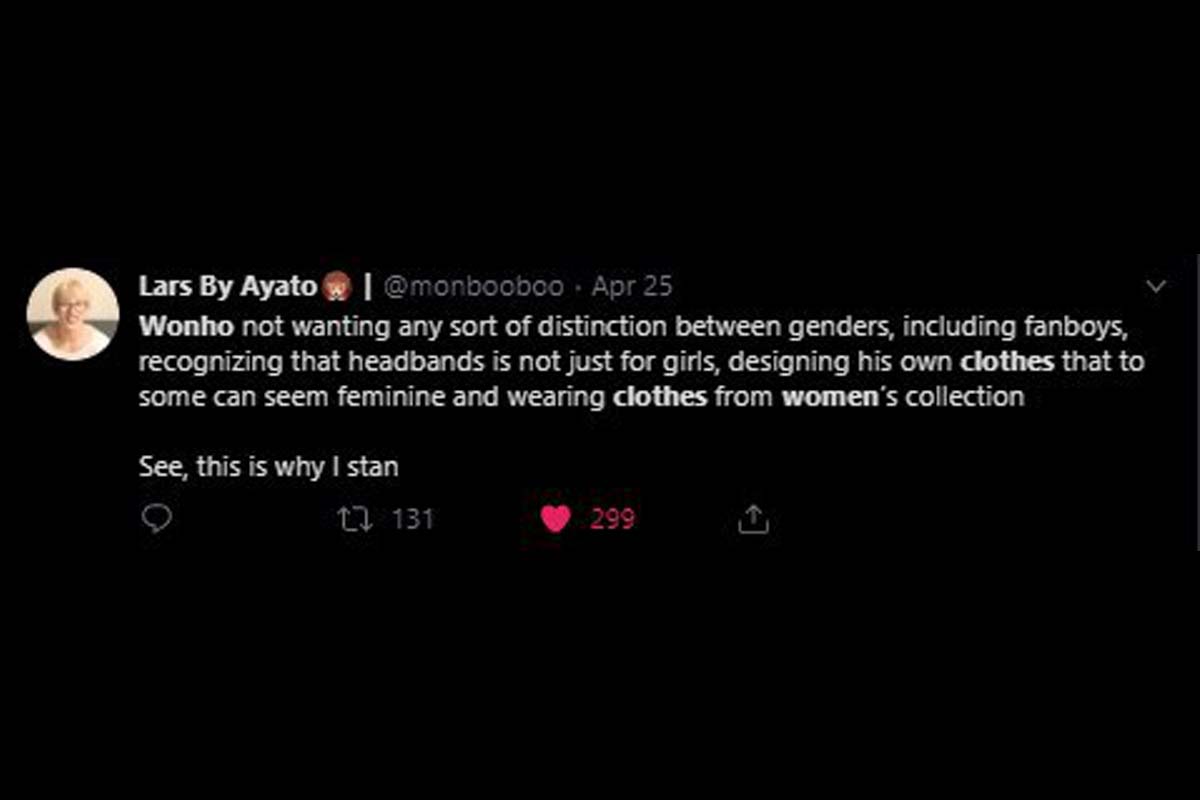 He also likes wearing clothes designed for the opposite gender. On one of the group’s meet-and-greet event, he wore a women’s sweater from Calvin Klein. And on one of his music videos, Wonho wore Bias-cut Tied Shirts Ivory Stripe Polo from NINANOSANO, which also came from the women’s section. 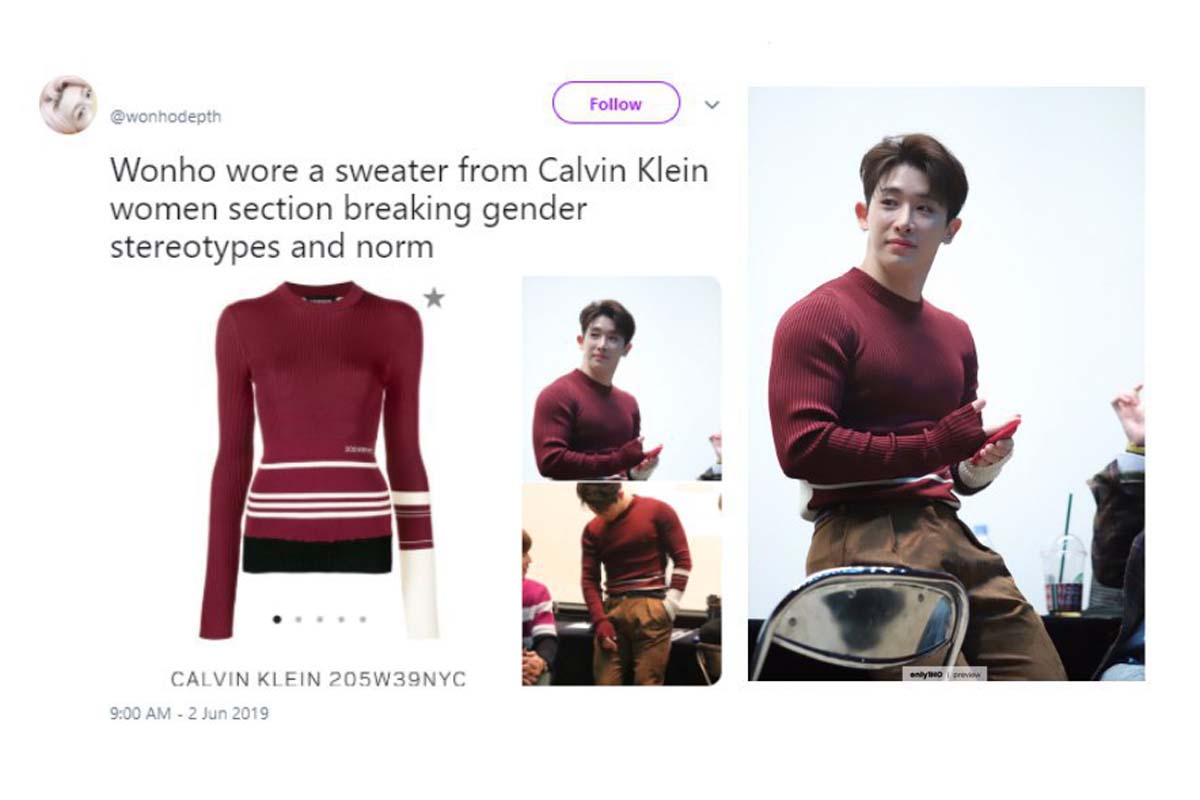 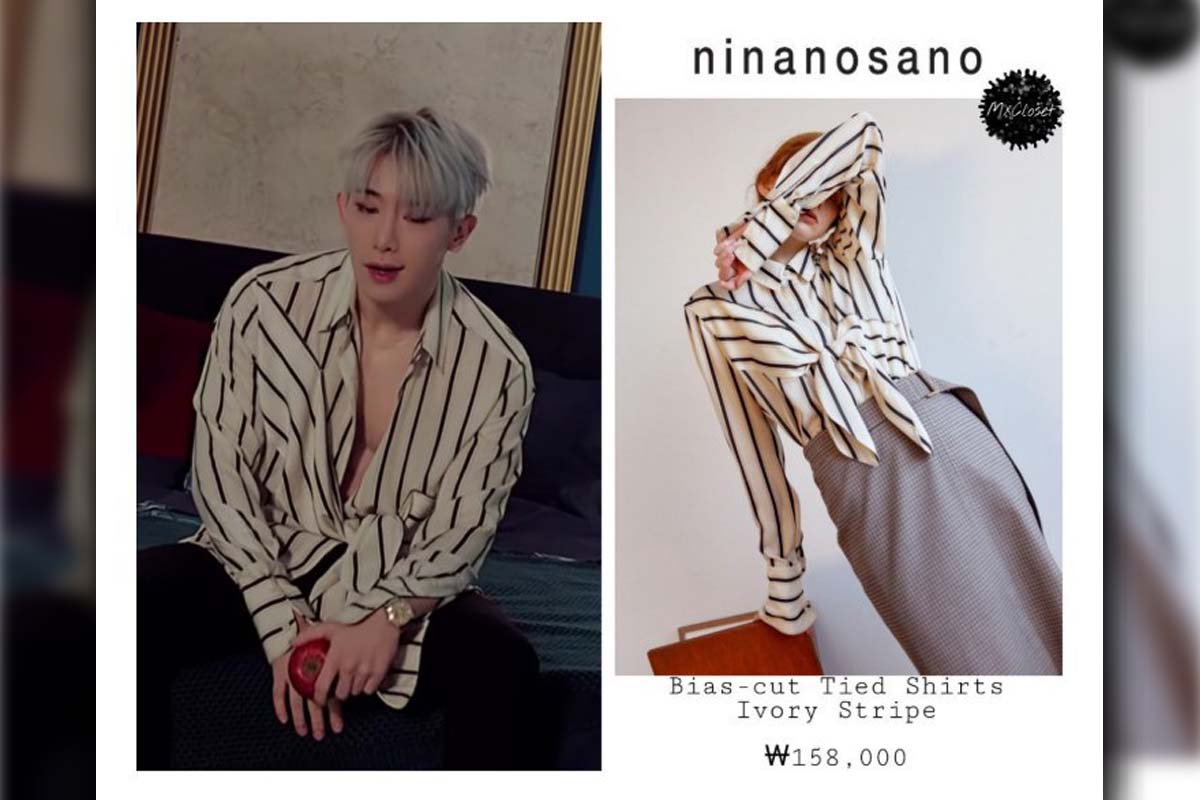 Who said nail art is only for women? The lead vocalist of Korean pop rock band FT Island, Lee Hongki, is not only known for his powerful voice, but also for his huge spending on nail art - to the sum of $45,000 in a year!

His nail art receives different responses, but this does not stop him from expressing himself. The rockstar even published a 144-paged book in 2013 entitled ‘Lee Hong Ki Nail Book’ which includes the singer’s insight and stories on nail art. The book went on to become a best-seller in Korea, Japan, and China.

Amber Liu is one of the most notable idols who has directly addressed the issue of stereotyping. Ever since their group, f(x), officially debuted in 2009 under SM Entertainment, Amber already showed her individuality and broke the gender norms for ladies in South Korea. From long, shiny hair, skimpy clothing, and the classic red lipstick, Amber sported a short-cropped, androgynous hair, with a snapback and a pair of baggy shorts.

To this day, Amber continues to never let society’s standards affect who she wants to be.

Even before making it to the big stage, Ren is well-known for his ‘pretty’ features. ‘Pretty‘ is a term the society often uses to describe females, and is somehow demeaning when used to describe men. However, NU’EST’s Ren begs to differ. He sported his signature long hair ever since debut and has kept it ever since.  Because of his charm, he even modeled for skirts!

He once mentioned in an interview that, "people around me tell me that I look like a girl, but I think these sort of reactions are fun, partially because it makes me hope that they will want to get to know me better." He may possess feminine traits, but he strongly contrasts his pretty boy image with his powerful performance.

Known as South Korea’s top self-producing boy group, Seventeen made their debut in 2015 with a refreshing school group concept with ‘funky pop song’ Adore U. It cannot be denied that Jeonghan is an eye-catcher, with his feminine-like looks and auburn locks which he sported during his early career.

Following Adore U is another hit song Mansae from their second EP. In this era, Jeonghan’s hair grew longer. His hair also varied in color. From lavender to blond and then to red! On the succeeding comebacks that Seventeen had, Jeonghan had opted to cut his hair short for a more ‘masculine’ look, as the idol seemed to have grown tired of all the misgendering. He’s still very much well-loved by fans, because of his talents and genuineness.

BTS’ youngest member, Jungkook, also has something to stand up against breaking gender norms in fashion. In a magazine interview with Vanity Fair, he stated that regardless of gender, the key to great style is wearing anything. Jungkook always chooses what he wants to wear despite the boundaries set, especially in traditional Korea. For him, fashion is gender fluid.

He had also stated on a VLive broadcast that he wanted to try getting manicured nails as he had seen on Lauv and is a proud supporter of  the LGBTQ+ community.

More often than not, gender discrimination still largely happens every day. Thankfully, these idols are vessels of change and are using their talents and influence to push gender stereotypes.  With their influence on people, hopefully, the public would start accepting diversity the way they patronize their idol’s music.


Rappler’s photo of the crowd at the footbridge is now the..


Down to his last vlog, YouTuber Lloyd Cadena never failed..