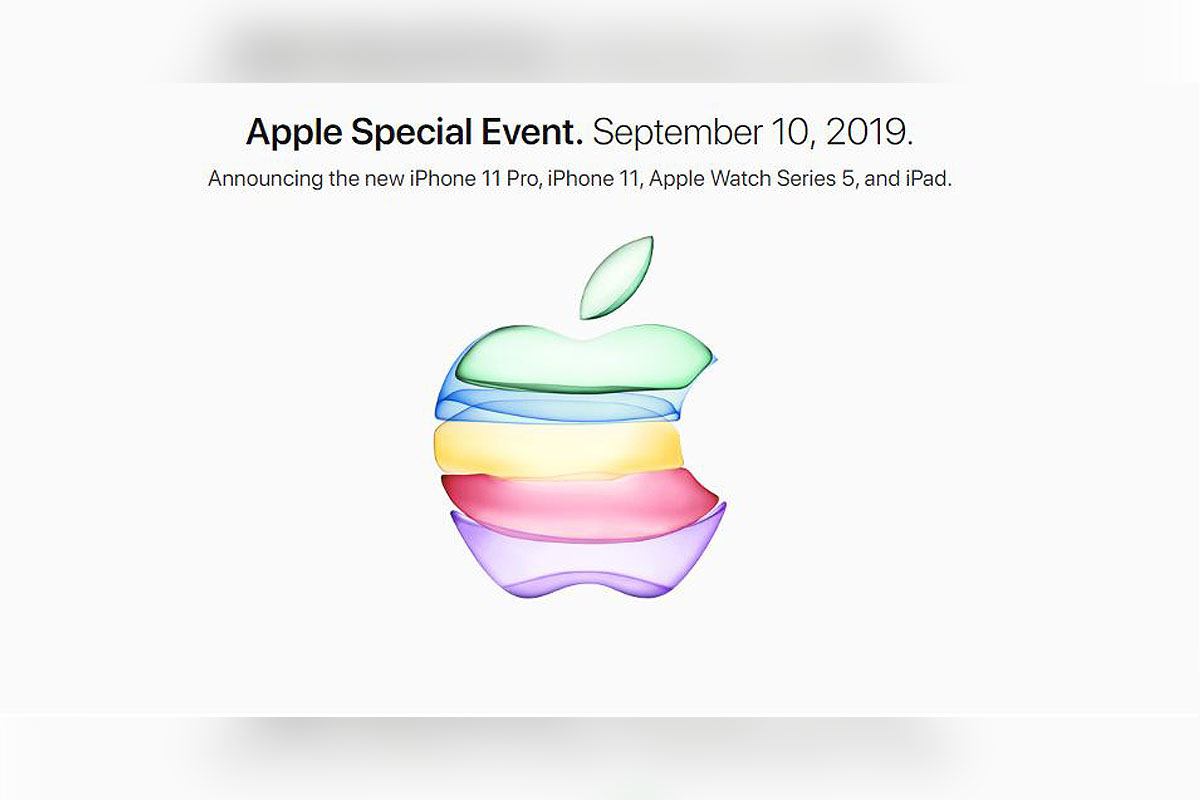 September 11, 1 a.m. Philippine Time (Sept 10, 10 a.m. PT)— One of the most awaited tech-events for Apple fans and tech-geeks alike, “Apple Special Event”. It’s that time of the year wherein Apple announce their newest product and/or services, held in the Steve Jobs Theater at Cupertino, California. This year’s Apple Special Event was bountiful, this time the Apple fell far from the tree, or should I say roots, and that’s a good thing. First things first, here’s everything you need to know during Apple’s event. 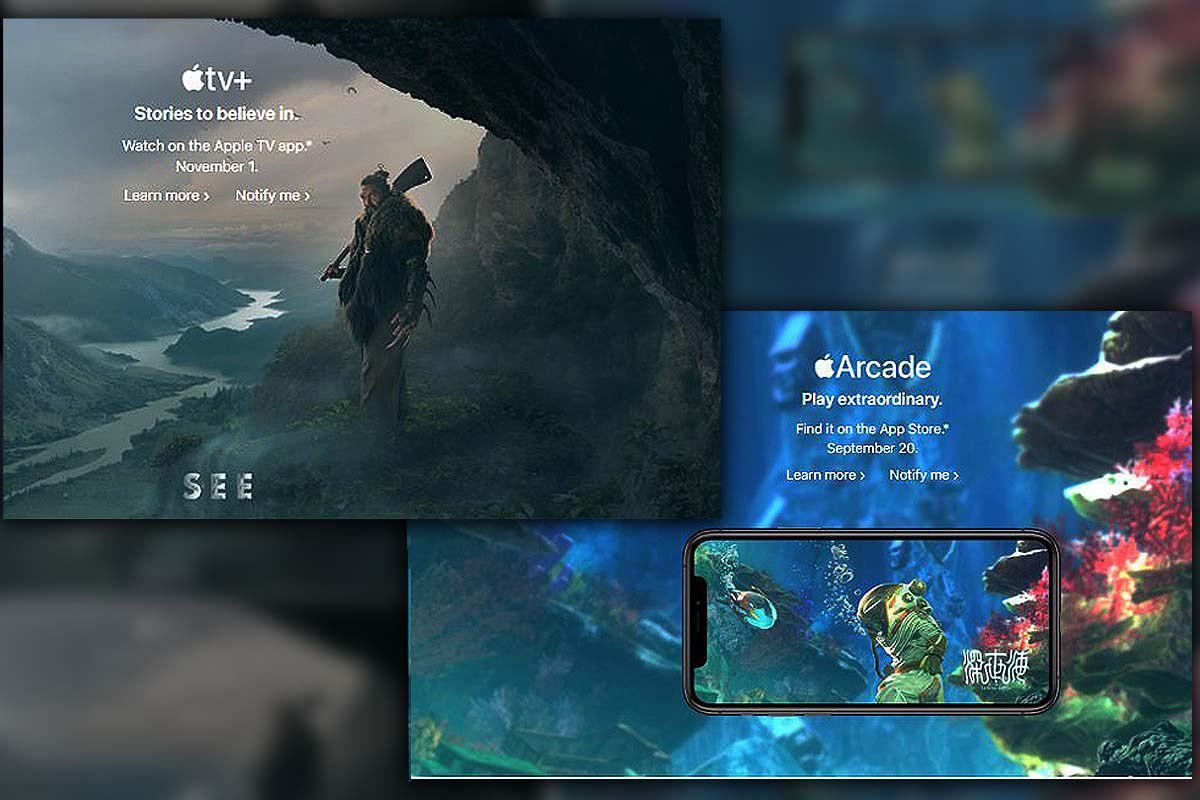 Apple tv+
You basically get access to several shows at launch. Also the monthly release of Apple Originals to add to the collection. The Family Subscription is up to 6 family members. Apple announced during the event, starting then they’ll be giving away a 1 year free trial of Apple tv+ to anyone who buys any of these apple products; iPhones, iPad, Mac or Apple TV.

Apple Arcade
Same with Apple tv+ but replace shows, with games. That’s right, an unlimited collection of games. Apple said you can pick up where you left off from one Apple product to another, as well as play from any of them. You can share this subscription with up to 5 family members. They claim a “Download to play, online or off” since mobile games are notorious for being online-based games, it’ll be interesting to see how it’ll work.

Conclusion: Both heavily depend on the right shows and games to release, the lineup for the first few weeks, to win consumers over. Quality, they need quality and not quantity. They may be the top dog for Mobile phones and laptops, but they’re stepping onto a foreign ground. Netflix, Disney, Playstation, and Xbox are all top players in their field. Though props to Apple for exploring. They’re fresh if you don’t want to commit they offer a free trial, a month for Apple Arcade and 7 days for Apple tv+.

Boasting the Always-On, LTPO coated, 977/759 sq mm, Retina display. It’s absolutely better than the Series 3’s slightly outdated OLED display. Before the announcement of the Apple Watch newest 5th Series. Apple pulled the plug on their Series 4, leaving Series 3 and 5 to be the only Apple watch to have. Thus making it a more sensible decision to get the newest version, especially if you’re meticulously-techy, of course. This smartwatch “refreshes dynamically” to a whooping framerate of 60hz to as low as 1hz, maintaining that “Always-On Display” but still maximizing the “All-day battery” of 18 hours (Same with the Series 3). The Compass app has been added combined with the updated Apple Maps, allowing to see in the Map App where you are facing. New Emergency features added such as; Built-In Fall detection and for the cellular model can call International Emergency hotlines.

There are 3 models in total: 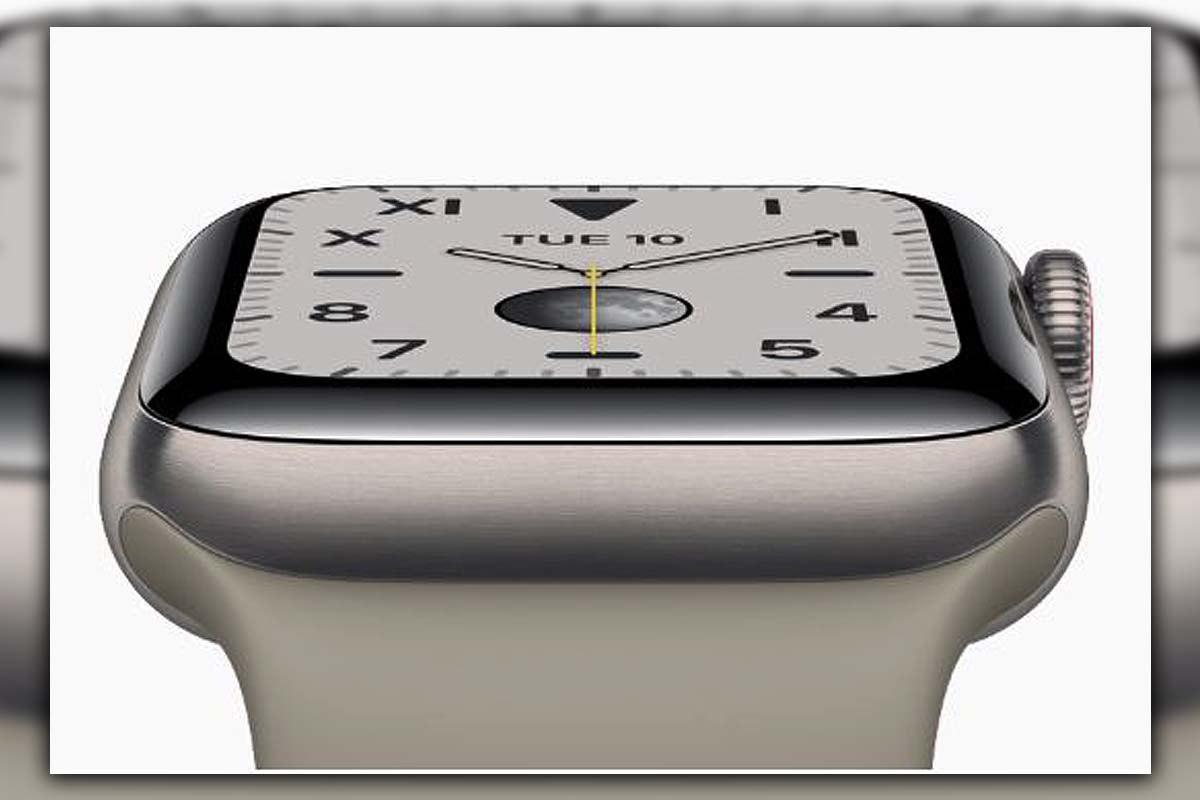 Conclusion: Who wouldn’t want to have the latest Apple watch, right? But then again, how many would be able to afford it? The release of the Series 5, led the series 3 to have a major price cut, from $279 to $199 (from around P15 999 to P11,990). Like what I said earlier, the Series 3 and Series 5 are the only Apple Watch available for retail. I mean there are still Series 4s out there in the market but sooner or later they’ll all be gone. The consumer might side to the more price-friendly watch compared to the power-packed yet pricey one, especially in the Phillippine market. Filipino consumers want the experience and there are not a lot of differences between the two Apple watch. 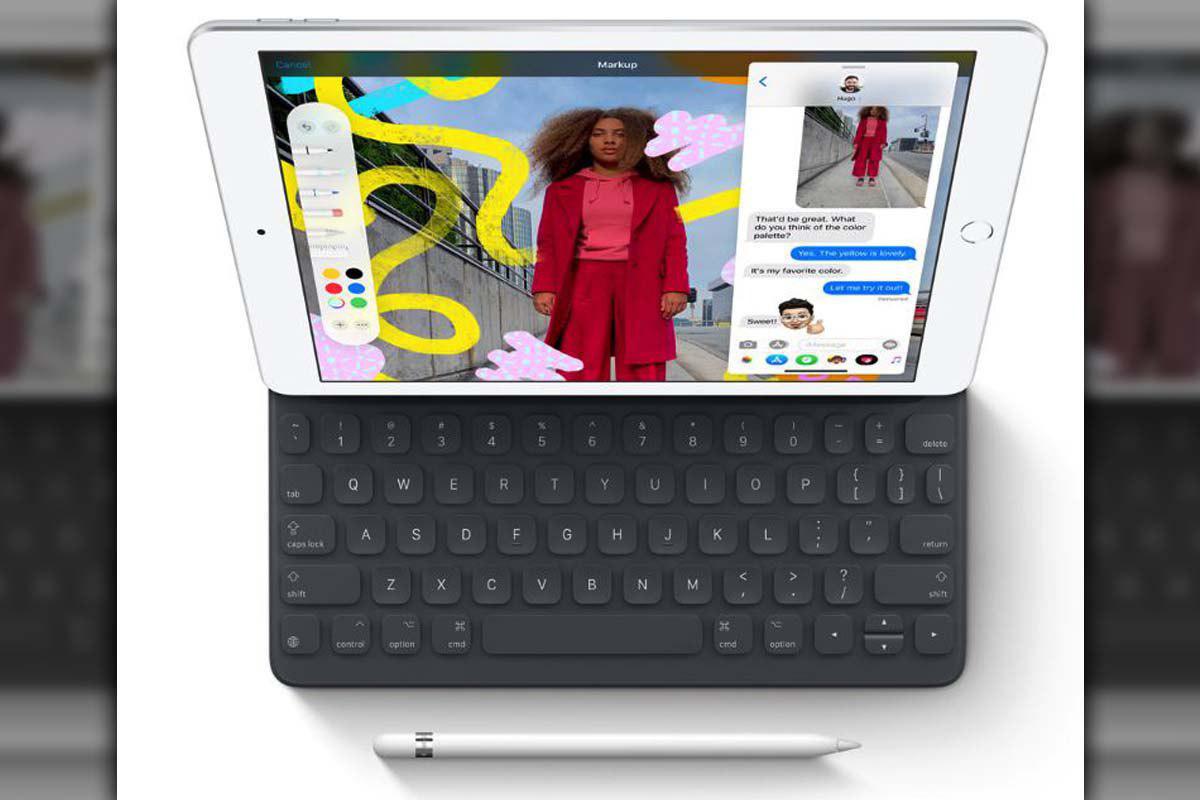 Bigger 10.2 inches display; the Versatility of a Tablet with the Capabilities of a Laptop

One of Apple’s favorite children, the iPad has finally grown a bigger display. For the longest time has overworn the 9.7 inches display and is now rockin’ the slightly bigger 10.2 inches. Though the bezels are thick for an iPad in 2019. The good news is, like the Apple Watch’s cases, it is also made with 100% recycled Aluminum. Apple announced that the iPad 7th-Gen will be running on iPadOS (iOS 13).The bigger screen match with the capability of pairing with Apple’s Full-size Smart Keyboard and a more suitable Operating System. This could probably replace your everyday laptop. Despite having the same A10 Fusion chip as the predecessor, Apple claimed that this is two times faster, smoother and handles multitasking better. Quick Specs below: 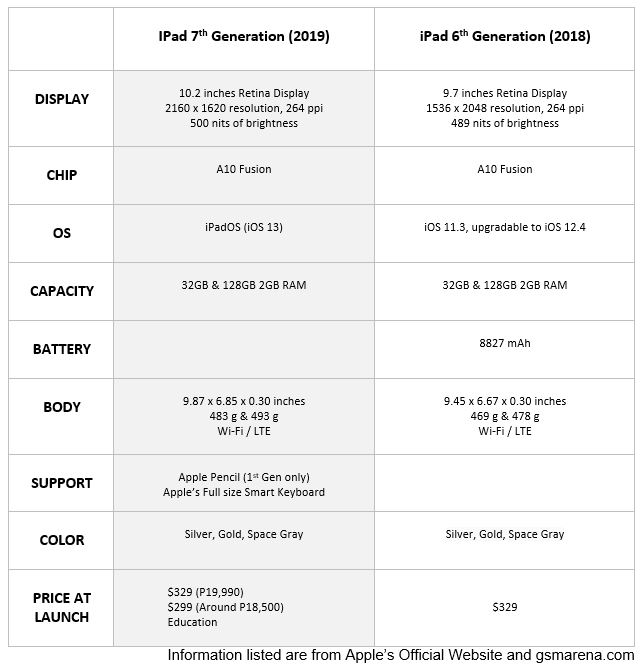 Conclusion: The good thing about this is the accessories and a bigger display. Not much of an upgrade hardware-wise on paper, though the new Operating System is a great touch. Talking about value? You’re getting pretty much a newer version of the iPad 2018 for the same price. Get this if you want the versatility. Though the accessories can cost you more, it's necessary to really optimize the iPad 7th Gen new OS and display. Despite that, I think the iPad is priced that way to give a little room to spend on the accessories. Think of it as a more powerful Chromebook, more compact than a low-end laptop. 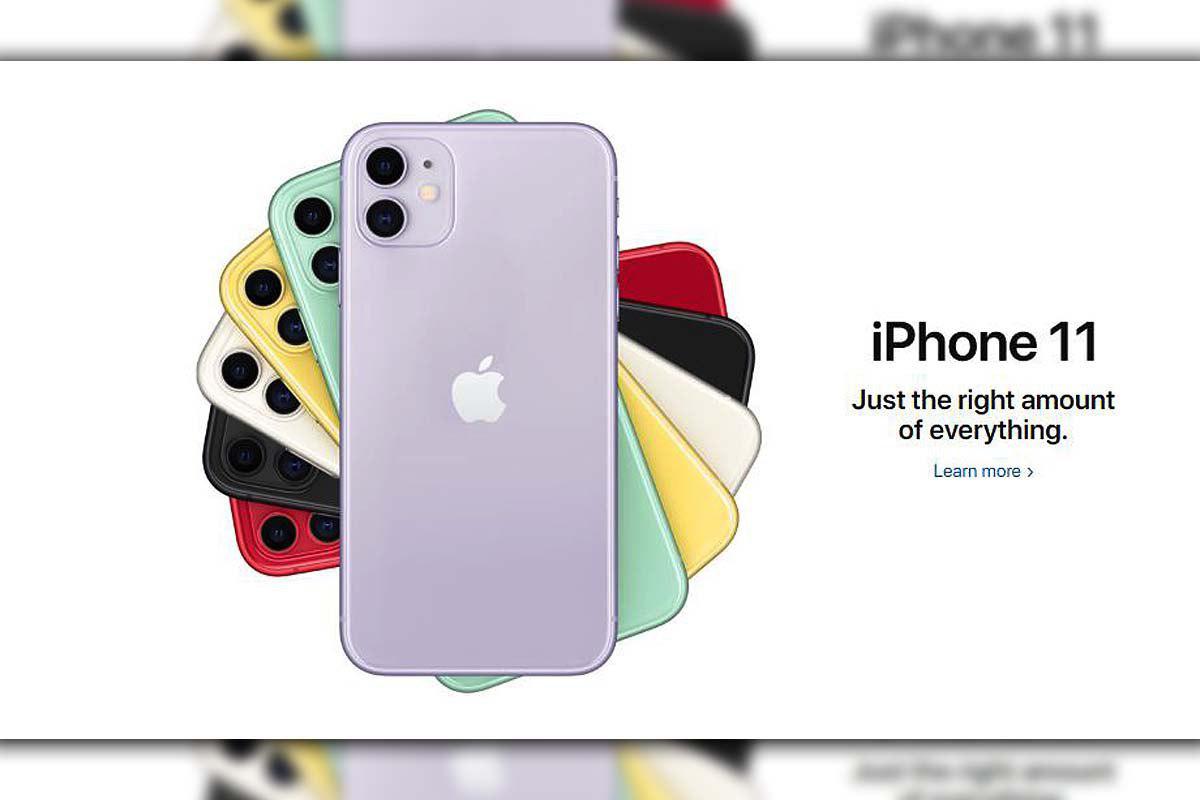 Finally, the iPhone improves battery & the next-gen chip, A13 Bionic.

We’ve been waiting for this, I know. The undoubtedly favorite child of the Apple clan, the iPhones. After a slightly mediocre Apple event last year. With a lot of mixed emotions about the iPhone X lineup, this makes up for it. Same as last year, 3 phones were announced. The iPhone 11, iPhone 11 Pro and iPhone 11 Pro Max. So I guessed they dropped the “S” and replaced it with “Max”. Anyway let’s talk about what’s new:

The New A13 Bionic Chip, it’s currently the fastest chip in the market. It’s smart design, focuses on leading performance and efficiency. To simplify things: taking a 4K video at 60fps and the phone would optimize the battery for longer use. Power-efficient is its specialty. Despite the small capacity of the iPhones battery compared to other flagships, it truly maximizes the little battery it has. Speaking of battery, Apple decided to bump up the mAh of their new iPhones. The iPhone 11 with 3110mAh, iPhone Pro with 3190mAh, and iPhone Pro Max with 3500mAh. A big improvement from the iPhone Xs battery. The iPhone XS Max slightly beats the 11’s battery by just 64mAh.

Dolby Atmos. They support Dolby Atmos and provided what they call “spatial audio” in which it’ll sound like an immersive theater experience. Meanwhile, the Pro and Max version also supports Dolby Atmos and Dolby Vision, as well as a gorgeous Super Retina XDR with 1200 peak nit of brightness, that’s really bright and yet 15% more energy-efficient, thanks to the A13 Bionic chip. It also comes in the box a fast charging adapter.

iPhone 11 has the rear dual-camera system. The 12MP Wide camera (f/1.8) and the 12MP Ultra-Wide camera (f/2.4) with a 120° field of view. In the front, it has a 12MP TrueDepth Camera. That can also widen if you change the orientation of your phone. Apple also added “Night mode”, which really lightens and reduces the noise when the subject is dark. Then we got video, both rear and front camera support; Slo-Mo, 4K at 30/60fps, Cinematic Stabilizer, as well as changing from the Wide lens to Ultrawide. There’s also a neat little function called Quicktake. If you want to catch a short video, you hold the “Capture” button despite being at the Photo setting.

iPhone 11 Pro and iPhone 11 Pro Max has the same cameras and functionality as the iPhone 11 but comes with an extra lens at the back. The 12MP Telephoto Camera (f/2.0). With the combination of these three lenses, capturing images and videos is called Deep fusion. While taking videos it can simultaneously change from one lens to another without changing the quality of the video. It may not be a 48MP camera but it has all the tools that lead to an endless and fun way of expression through photos and videos. 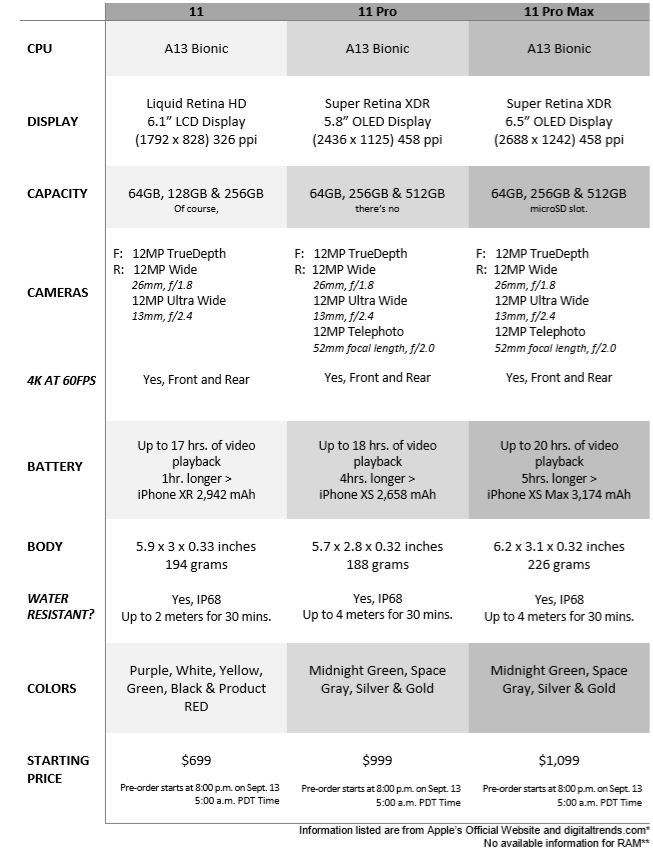 Conclusion: It’s the most for its value, despite reaching the thousand dollar mark. The following improvement really justifies its price tag, compared to the overpriced iPhone Xs, well that’s just me. There’s is another cut in price alongside the release of the new iPhones. The iPhone XR and iPhone 8 are now a hundred dollars cheaper, $599 and $449 respectively. This is the first time for me that the base phone, is the most valued. 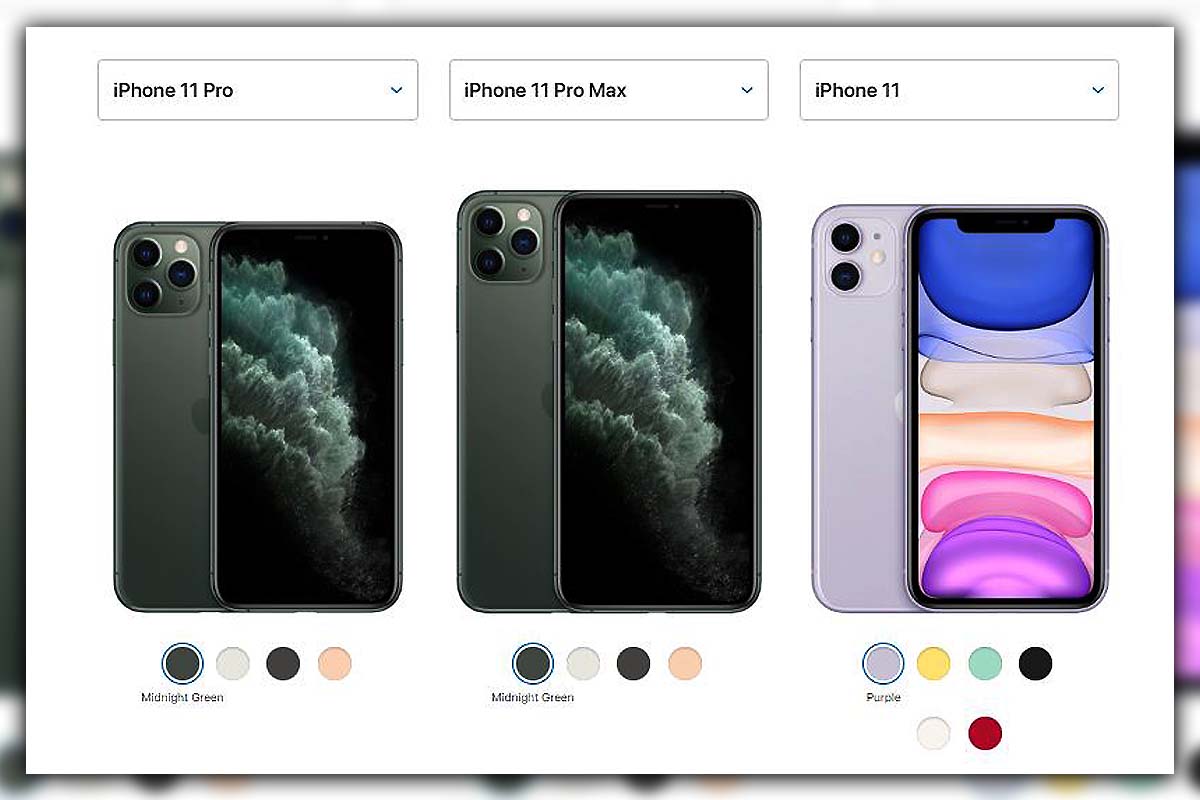 Apple has finally looked down from its pedestal and delivered truly great products. They’re probably noticing the innovation other tech companies have been doing and feel they’re no longer invincible. Prompting them to be competitive as well, just like back in 2008, pushing the limit of mobile technology. The products announced are all great and in between “must-buy” and in consideration for purchase, slightly leaning to the “must-buy” end. The good thing this unveiling did is the price cut it has done to previous products, still competitive but not the latest. Though it’s okay since not everyone is going to use 4K video at 60fps as well as three lenses, just to take pictures of regular, mundane portraits. Just to add, my favorite part about this particular event is the shift Apple has taken that could lead to a spontaneous dynamic effect for other tech companies, especially as big as a company like Apple.