The New Nintendo Switch Lite: All About It


A not so pricey way to play switch games, minus the gimmicky charms of the original. Imagine this being the same as the 3DS’s 2DS or the forgotten Wii Mini.

Not a single soul:

Nintendo drop the video for the newest addition to the Switch family, Nintendo Switch Lite. There has already been a lot of mixed emotions since the video launched around 18 hours ago. There were a lot who were disappointed by the lack of the Switch’s Charm, the reason why it’s called a switch in the first place. The variety of playing style that you can do in one console. But then there’s those who are excited to get their hands on this teeny-weeny switch’s younger sibling.

But before that, the specs: 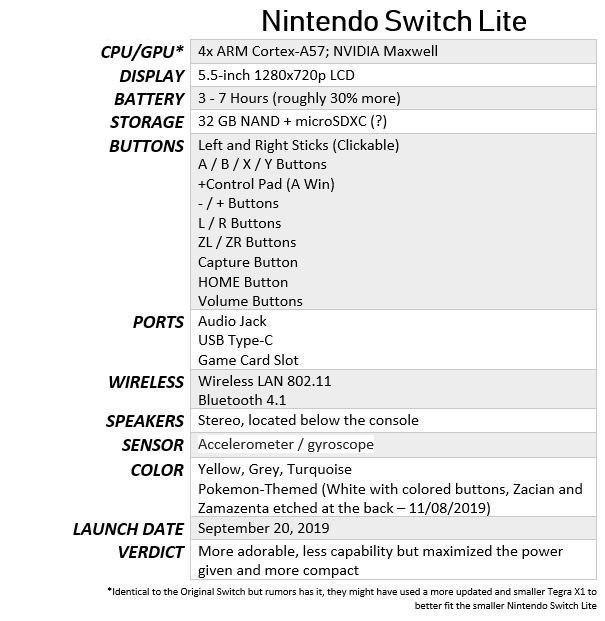 Tegra is a system on a chip (SoC) that is made for mobile devices. Such as mobile phones, tablets and so on.

The PROS and joyCONS:

Let’s start with the negative, as the name suggests the joyCONS, or the lack thereof. The first thing people noticed are the non-removable controllers that the Switch are known for. This also means the system doesn’t support Rumble and IR Motion Sensor. Another thing it doesn’t support is TV output despite having a USB Type-C port, so you’re stuck with the 1280x720p screen with no Auto-brightness. Just like the original Switch, it still doesn’t connect to any bluetooth headphones, sadly. Lastly, you can still play switch games but if it's handheld mode compatible though, technically you can still play games such as 1-2 Switch but you need to have a separate pair of Joy-Cons, a way to charge it, the patience to play a 2 player game on a smaller screen as well as a way to have it stay upright since there’s no kickstand.

On a more positive side, it’s more portable. It fits better in your jacket/pocket on the go, pair that with a better battery life, 3-7 hours, roughly 30% more than the original Switch. Almost being only the same size as the Original Switch’s “tablet”. The compactness is its charm. Speaking of compact, having a smaller screen, in this case, is better. The 720p display looks sharper in this screen, better visuals. You can still play with other people via Online, games such as Mario Kart. Since it has the same GPU/CPU as the original, it can handle demanding games such as Zelda: Breath of the Wild in a smaller system. A hundred dollar cheaper! That’s P8,000 - P10,000 cheaper.

Don’t make the switch if you already have the original version, the sudden change of the screen size plus the feel in the hands would be a bother. You’re also sacrificing variety, the full switch experience (Including Nintendo Labo) for compactness and better battery life. Though if you’re really into handhelds, go for it! There are still talks about “a shared account” for all your Nintendo systems. It all comes down to preference, if you like to play Nintendo games on the big screen and/or with other people, stick with the original but if you want a more personal way to play your beloved Nintendo games, then get the Lite.

A not so pricey way to play switch games, minus the gimmicky charms of the original. Imagine this being the same as the 3DS’s 2DS or the forgotten Wii Mini. Though the plan is for the Switch Lite to co-exist with other Switch system, by other, there will still be a new Switch system coming. Like with phones, if there’s small or lite version, then there’s the Pro. *mindblown*